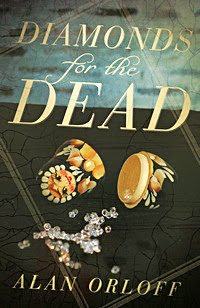 I'm pleased to introduce Alan Orloff as my first guest blogger. Alan's debut novel, Diamonds for the Dead, was released in April by Midnight Ink. Be sure to visit his blog: A Million Blogging Monkeys. (Someday I need to ask how he came by that title.)

My Writing Life by Alan Orloff

I’m not sure why or how, but about six years ago the urge to write fiction erupted from somewhere within and slapped me rudely on the face. And, I should say, the urge wasn’t telling me simply to write—it wanted me to get published, too.

An engineer by training, I decided to conduct a “proof of concept” before I started my Great American Novel, just to make sure writing “agreed” with me. First, I wrote a few short stories. I was bold enough to let my wife read them, and, much to my amazement, they didn’t stink. Then I took an adult education class at a local high school. More short stories, still didn’t stink. Next, I enrolled in a writing workshop at a wonderful facility, The Writer’s Center (Bethesda, MD). I wrote some more and I still didn’t stink.

I wasn’t very good, but I didn’t stink.

Best of all, I enjoyed writing. Really enjoyed it (and that’s saying a lot from a guy who hated English classes in high school and college). So I kept at it, writing one novel, then another. I found a critique group and submitted pages and critiqued pages and learned a ton about good writing and bad (this included recognizing similes as smelly as a skunk that’s been run over by a school bus and left by the side of the road for two weeks in ninety-five degree weather). When manuscript number three was finished—really finished—I took the next big step toward publication. Time to query.

I drafted a query letter, revised it, honed it, and polished it until I could see my desperate face reflecting back at me. Then I sent it out. I was sure my manuscript was good, and I was sure my query was solid.

One hundred rejections later, I knew that a good manuscript and a solid query letter didn’t stand a chance, not in a tough marketplace. I needed to get better.

So I wrote some more. And more. And more. Finished a fourth manuscript, revised it until it was very good. Then wrote a dynamite query letter. This time, I attracted (and signed with) an agent. Yay! Then it didn’t sell. Boo! I got the feeling the agent wanted to concentrate on non-fiction, so we parted ways amicably.

But that left me back in Query Heck.

I wrote another manuscript. And worked on it until it sang. Then…well, you know the drill. Concoct a query. Again, I was fortunate to sign with an agent. And this time…this time…SALE!

So here’s my five-pronged strategy for success on the road to publication:

Take classes. How else will you learn what to do?
Get thyself into a critique group. How else will you get feedback on your particular project?
Join a professional writing organization. I belong to MWA (Mystery Writers of America) and ITW (International Thriller Writers).
Read, read, read. Learn from those who’ve gone before you.
Write, write, write and never give up.

A special thanks to Alan for being here today. If you want to know a little more about Alan's background and how he decided to become a writer (and sample a bit more of his excellent sense of humor), check out his blog post of May 24th: When Did You Know? You'll enjoy it. I promise.
Posted by Patricia Stoltey at 6:00 AM

A wonderful guest write Alan, most interesting to read.

I love reading inspiring stories like this, especially from writers for whom writing is not their first career (isn't that a nice way to say "older"). Congratulations, Alan, on such a great success.
Karen

Patricia, thanks for hosting Alan. It's always enjoyable learning more about authors.

Alan, glad you ventured out into the writing world. Wishing you much success.

Patricia - Thanks so much for hosting Alan : ).

Alan - I had a similar experience to yours, in that I didn't get started writing fiction - well, not mystery fiction - until more recently in my life. It's a lucky thing for us that you got "the writing bug!"

Hi Alan. Your story is more and more common in today's market. Sounds very much like mine. Thanks for sharing.

Good advice, Alan. Even with all the changes in the industry, there's still no better advice than 'hone your craft and keep writing.'

Started Diamonds late last night. I'm over half way through and will finish it later today. In case you can't tell -- It's great!
Maribeth
Giggles and Guns

Yvonne - Thanks! Enjoy your day too! And the rest of the week!

Karen - Thanks! I think I prefer "wiser."

Mason - Thanks! It's been a "venture" all right.

Margot - Thanks! Sometimes writing really does "bug" me.

Steve - Give me the good old days when you just banged something out on your Underwood and sent it over the transom and voila, you're published :)

Terry - Changes? What changes? I step out for a minute and there are changes?

Maribeth - Thanks! Glad you like it, so far. Have you gotten to the part with the space aliens?

Oh, sweet heaven, it can be done!

Thanks for sharing Alan's story with us. And thanks to Alan for indulging our curiosities about how many books/queries/rejections it takes to make a great writer.

It gives me hope!

Thank you, Patricia for hosting Alan, and to Alan for a well said and inspiring post. On a limited budget unfortunately I have to pace myself, but you're both on my list of books to buy.

Catwoods - I didn't even mention most of my rejections! Good thing I have a thick skin.

Ann - Thanks for stopping by, Ann!

And Patricia, thanks so much for hosting me--you've got a great blog and a great bunch of regular blog readers. Glad to be part of the fun today!

Stories like these are great. Thanks for sharing, Alan. Checking to see if I stink - nope, not too shabby. I'll pop over for a visit.

Patricia, this is cool.

So sorry not to make an appearance during the day yesterday, but once again I was without internet access for many hours.

Alan, I loved having you here as my very first Thursday guest blogger. Thanks so much for tending the comments. I wish you tons of success with Diamonds for the Dead.

Alan, you're a great example of the importance of perseverance for writers as well as an inspiration for the yet-to-be-published.