I'm pleased to present Alex J. Cavanaugh as my guest blogger today. He's three days into his blog book tour for his debut sci fi novel, CassaStar. If you want to follow Alex's tour, here's the link to his full schedule. His next stop is on the 17th at Edi's Book Lighthouse. 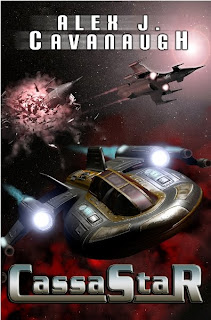 Thanks for hosting me today, Patricia! This is the first week of my blog tour for CassaStar, which comes out on Tuesday, October 19.

Hopefully your readers didn’t hit the back button when they realized I’m a science fiction author. The genre scares people sometimes. They see the word ‘science fiction’ and assume it’s chock full of geek tech, three-headed aliens, and other assorted elements that appeal to the average boy. (“Boy” implying any guy between ten and fifty, of course.) However, there’s as great a variety in science fiction as in any genre. And there are plenty of women who read (and write) science fiction as well.

Science fiction is nothing more than a setting and backdrop. The story within the pages can reflect any genre – mystery, romance, horror, western, etc. For example, Robert A. Heinlein’s Starship Troopers is military in nature. Timothy Zahn’s work focuses on adventure. The Hitchhiker’s Guide to the Galaxy by Douglas Adams contains a wicked sense of humor. Want to read a sweeping, grand-scale drama? Try Frank Herbert’s Dune. Each of these books contains elements of other genres, and the combinations are endless. When you think about it in those terms, a science fiction story can be about anything!

What drives a good story are the characters. It doesn’t matter if the setting is alien, or if the people are alien as well. The Star Trek and Star Wars universes aren’t insanely popular just because of the setting – people love the characters, and won’t hesitate to tell you their favorite. (Jean Luc Picard and Han Solo – in case you’re interested!) If we relate to the characters, we’ll enjoy the story.

Yes, my book is science fiction. It features a race not unlike our own faced with the threat of war. Space battles ensue as the military attempts to fend off the invaders. But at the heart of CassaStar are the main characters – two men with tragic pasts who form an unlikely friendship. Despite the backdrop of war, the struggles and triumphs of my characters remains the focus.

And that is the story I want readers of all genres to discover and enjoy!

Alex J. Cavanaugh is a sci-fi writer on a journey of discovery. Books, movies, music, games, writing... he covers many pop culture topics on his blog. Alex has a Bachelor of Fine Arts degree and works in web design and graphics. CassaStar, his first novel, will be released October 19 2010.


As a bonus, here's the synopsis for CassaStar:

To pilot the fleet’s finest ship…

Few options remain for Byron. A talented but stubborn young man with a troubled past and rebellious attitude, his cockpit skills are his only hope. Slated to train as a Cosbolt fighter pilot, Byron is determined to prove his worth and begin a new life as he sets off for the moon base of Guaard.

Much to Byron’s chagrin, the toughest instructor in the fleet takes notice of the young pilot. Haunted by a past tragedy, Bassa eventually sees through Byron's tough exterior and insolence. When a secret talent is revealed during training, Bassa feels compelled to help Byron achieve his full potential.

As war brews on the edge of space, time is running short. Byron requires a navigator of exceptional quality to survive, and Bassa must make a decision that could well decide the fate of both men. Will their skills be enough as they embark on a mission that may stretch their abilities to the limit?

And a review quote from Library Journal:

“…calls to mind the youthful focus of Robert Heinlein’s early military sf, as well as the excitement of space opera epitomized by the many Star Wars novels. Fast-paced military action and a youthful protagonist make this a good choice for both young adult and adult fans of space wars.”

CassaStar may be purchased at amazon.com, Barnes & Noble, Books-a-Million, and Powell's. The book is also available as an ebook for Kindle, IBookstore, Nook and others.
Posted by Patricia Stoltey at 6:00 AM

Patricia, thanks for hosting Alex.

Alex, you touch on a point that I'm becoming more and more aware of - books labeled under one genre usually contain elements of other genres too. I love sci fi movies and TV shows, but I've never read them. I realize now what I've been missing. Thanks for the interesting post.

Mason, I think most books have blends, and science fiction more than most.

Alex, you are so right. It's the emotional component between characters you care about that drive you to turn page after page. I can't wait until your book is published, and I can read it.

I got hooked on SciFi when I read Orson Scott Card's Ender's books and then Children of the Mind. So I'm very interested in Alex's book. Thanks so much for hosting Alex, Pat; and thank you, Alex, for this provocative description of the genre and your new book. I'm anxious to read it.

Sounds like a great book, Alex. I'm definitely going to pick up a copy--I love SF, especially those in the vein of Starship Troopers or Ender's Game.

Patricia - Thanks for hosting Alex.

Alex - Thank you so much for the reminder that SF does not preclude all sorts of themes, plots and characters that look at the human condition. I got my first dose of reality about SF when I read Isaac Asimov's series about Elijah "Lije" Baley - Caves of Steel, The Naked Sun, etc.. Here I was, a crime fiction fan, liking SF! Huh? But it worked for me.

I'll watch sci-fi, but don't usually read that genre. But I am branching out.

Since I read almost every genre, I see exactly what you're saying, Alex. It seems that sci fi, like fantasy, must be harder to write than some genres, though, because of the worldbuilding.

Great point about the backdrop. Sometimes a potential buyer needs to look past that and at the actual story. You can't jusge a book by its cover. Or its backdrop.

Like Helen, I watch it but don't usually read it. I've read some Gibson and love Fringe and some big screen SF moments.

But I will definitely be reading CassaStar! Looking forward to your writing debut, Alex. Congrats on your success!

Oh--and it is interesting to think of SF as just another setting, a location like any other (with some obvious differences, like aliens and advanced technology). Good point.

Alex, I read a ton of sci fi when I was a kid. I loved the characters and the worlds they inhabited. Best wishes on the tour!

Your book sounds exciting. I hope that it is wildly successful in the market. Your BBT is off to a strong start. Keep up the great work!

SciFi was my favorite genre when I was a kid. I still enjoy it, but now I prefer quite different stories than I did then. You are right about SciFi encompassing many other genres within the general label, which makes it so adaptable to find stories to please nearly every reader.

Lee
Tossing It Out

Michele, I read your post the other day about the genres you read - thanks, I'm honored!!

Thanks KK and Little Pickle - and everyone!

Alex, great summary and now I think I GET why I like some Sci-Fi and not other... I think some WRITERS don't get the character piece (then some writers of spy stuff don't *cough*TomClancy*cough* and I can't read that either.) Mechanics don't interest me, but stories about PEOPLE do. (Love Ender's Game, for instance)

Alex, I can't wait to read the book - planning to download it from Kindle soon! I love The Hitch-hiker's Guide to Galaxy, too.

Saw your trailer Alex and loved it. I appreciate such a clear description of what we love in books and how Sci-fi or any other genre rely on the characters to empower the story and the world.

I agree, bald and all, Jean Luc Picard was sexy and a great actor in Patrick Stewart. Han Solo, well it was Harrison Ford after all.
PS. Cassa Star is on my reading list.
Nancy
N. R. Williams, fantasy author

Hart, I definitely don't focus on the mechanics!

Talli, thanks - you're sweet! And December I will be reading YOUR book.

Thanks, Nancy. And Stewart just has such an awesome, commanding voice.

You're right, sci fi is only a backdrop for the story. Best of luck to you, Alex!

Thank you Patricia for hosting Alex.
It seems a fantastic book and am looking forward to it's release.
Good Luck Alex.

I love immersing myself in science fiction books, the new worlds, and yes, even the geeky technology, but it's true that such aspects are just a backdrop. There's so much more to SF than that!

Congratulations on your release, Alex! I love the plot teasers and am looking forward to reading it. :)

Congratulations on your debut release, Alex! I watch sci fi, but I've only read a few books in my life time. I have to confess I have trouble immersing myself in the story when the environment is unfamiliar. It could be that I have enough fantasy in my own life. Good luck with everything.

Alex, I don't read sci-fi often but you're right, I think I will like your story because it's just more than what we imagine sci-fi to be. Can't wait for the 19th.

Thanks so much, everyone! I think it's a story you will enjoy.

Alex: First, big congrats on your new release. You wrote this post for me, because I don't read Sci-Fi. I thought it too imaginary for my tastes. (I'm probably the only human who didn't see Star Wars). However, after reading the excerpt of your book, I'm tempted to find out more about the characters and give this genre a try! Nice review, too, from Lib Journal.

Alex, thanks so much for being here today. I wish you buckets of good luck with your blog tour, and tons of sales for CassaStar.

Wow - another fine stop on what is already shaping up as a GREAT tour! Nice job, Patricia and Alex. Also looking forward to stopping in on both of your blogs for my own virtual tour, starting--actually, today--over at Alex's blog.

Best wishes for a wonderful tour and scads of book sales!

This is fun, isn't it? (double winks)

Joyce, thank you!! I'm honored you're interested. I promise it's not techie.

Hi Alex,
I watched the video of your book and it looks amazing. This book looks and sounds very interesting. I also love the book cover. I love Sci-Fi movies, but have to admit not having read one yet. This might just be the first Sci-fi book I'll ever read.

Congratulation! I wish you all the best and success.

Tasha, that would be awesome!

Jemi, now you know what to tell them.