CURSES! Foiled by a Priest... by Susan Spann 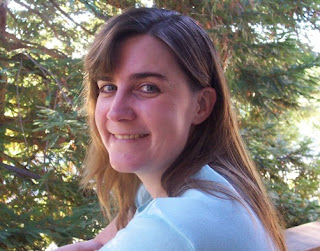 Susan Spann is a transactional attorney and former law school professor whose practice focuses on publishing law and business. She has a deep interest in Asian culture and has studied Mandarin and Japanese. Her hobbies include Asian cooking, fencing, traditional archery, martial arts, rock climbing, and horseback riding. She keeps a marine aquarium where she raises seahorses and rare corals.

You can find Susan online at her website or on Twitter @SusanSpann. Her debut Shinobi mystery, Claws of the Cat (Minotaur Books) released on July 16, 2013

CURSES! Foiled by a Priest... by Susan Spann 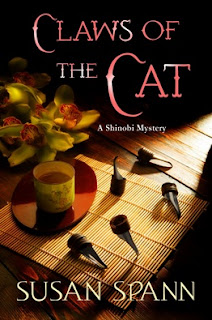 The idea to write a mystery series featuring a ninja detective popped into my head as a fully formed idea: “most ninjas commit murders, but Hiro Hattori solves them.” As a lifelong fan of mysteries and thrillers, I knew at once that a ninja (shinobi, in the Japanese pronunciation) would make a compelling detective, but the idea made me nervous for several reasons.

I studied medieval Japan in college, and loved the history and culture, but I knew most readers would not know much about the beautiful, and brutal, world of the samurai. I didn’t want to leave them behind, so I needed someone or something to bridge the gap. I also needed some compelling reason for my ninja detective, Hiro, to shed his assassin’s ways in favor of sleuthing.

After careful thought and a little research, I realized I needed a priest.

The Portuguese arrived in Japan in 1543, and the Jesuits followed soon after. Shinobi acted as spies and bodyguards as well as assassins, so forcing my ninja to guard a priest was the perfect way to produce the motive and opportunity Hiro needed to solve a murder. It also gave me a pair of Western eyes through which to explore and interpret Japanese culture.

More research revealed an unnamed priest who arrived in Japan from Portugal (by way of China) in 1563. I based my fictitious Jesuit, Father Mateo, on this priest. Claws of the Cat takes place in 1565, so when the book opens Father Mateo has spent two years in Japan. I needed that “offstage time” to bring him up to speed on basic Japanese culture – the things most readers would already know – because while I wanted Father Mateo to serve as a lens for Japanese culture, I didn’t want to talk down to readers with unnecessary explanations.

Father Mateo also serves as a useful foil for Hiro’s agnostic worldview. While both Hiro and Father Mateo have a strong, individual dedication to honor, their definitions of honor – like their worldviews – don’t always match, and sometimes even conflict. Father Mateo helps me bring Hiro into sharper focus by offering a useful contrast, and Hiro does the same for his Jesuit sidekick. Their differences also provide opportunities for tension—for example, in a shinobi’s world, lies present no problem, but for a Jesuit priest dedicated to truth as well as honor, Hiro’s falsehoods create a serious problem indeed.

While writing Claws of the Cat, I was surprised to discover the depth of the bond between Hiro and Father Mateo. Their friendship developed and strengthened throughout the manuscript, and by the time I finished the novel I realized it was more than just a mystery – it had also become a “buddy story.” That unexpected bond made Claws of the Cat great fun to write. It’s a about friendship as well as murder, the clash of cultures, geishas, ninjas, and samurai.

And there’s also a kitten - because every ninja detective needs a feisty kitten, particularly when his Jesuit foil is also allergic to cats.

Thanks so much for being my guest today, Susan. I enjoyed Claws of the Cat and appreciated the feisty kitten addition to your lineup of characters. That was fun.

I don't read a lot of historical novels or mysteries that are set before the 1900s, so I wasn't sure how much I'd like Susan's setting. As it turned out, I found the story a real treat. A good plot, likable characters, interesting historical facts and background, and a convenient glossary to help me with the foreign words. When the next book in the shinobi series comes out, I'll be first in line for another good read.
Posted by Patricia Stoltey at 6:00 AM

Pat - Thanks for hosting Susan.

Susan - Thanks for sharing the background to Claws of the Cat. What a fascinating time period and culture you've chosen! And it sounds as though you've grounded it all in actual history, which makes it all the more interesting. I wish you success.

I love books that are smart and well-researched. This story sounds fantastic and I love the "buddy" aspect of it. Best to you!

I lived in Japan for a few years and their history is fascinating. Cool he's a Ninja!

Hi Margot -- thanks for coming by. Susan's series is going to be a winner.

Julie, I think you'd like Claws of the Cat very much.

Alex, I had no idea you had lived in Japan. You probably would enjoy the book even more than I did.

Susan: a great concept and partnership to build the story around. Fascinating! This will be one I'll be putting on my to-read list. I enjoy cultural stories of the ancient far east.

Pat: Thanks...you've done it again...another new author with a great career ahead.

First, I love the title. Second, this is an extremely interesting blog. Congrats on the publication of your novel, Susan.

What a very cool development of a character! Such incredible history - and I love the cat addition!! :)

Pat, Thanks. And thank you, Susan,for sharing the process of formulating your story...the cultural contrasts, the character to interpret the culture, the off stage time, etc. It really helps to hear how the author put it all together. Sounds like a fascinating story.

Thank you so much for hosting me, Pat! (I tried to post a comment earlier, but I've been out of town and my phone wouldn't let me do it.)

Also, thank you so much to everyone for all of the encouraging compliments and comments. I'm delighted to be able to share the story, and its creation. It's an honor to be a guest here on Pat's blog.